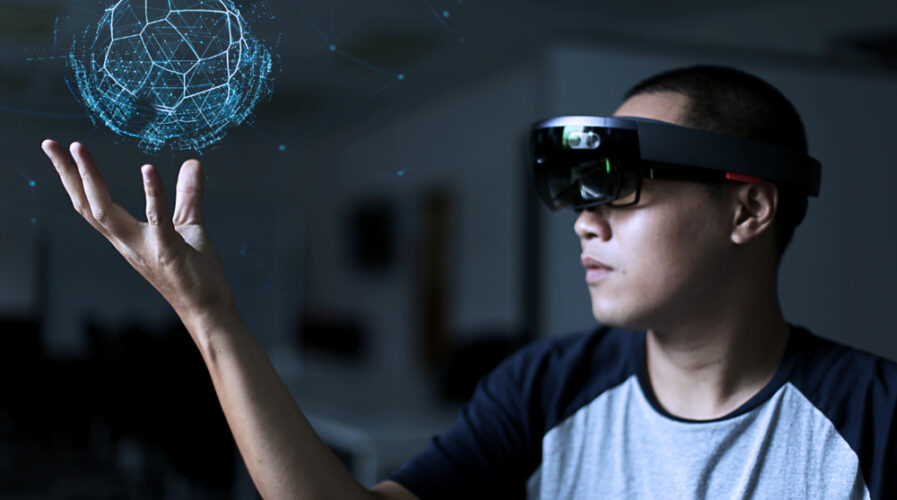 The concept of “metaverse” is not a new one, and the idea has been around since Neal Stephenson published Snow Crash in 1992, then used in Ernest Cline’s novel “Ready Player One.”  It is a shared, persistent, 3D virtual space where people can meet and interact.

During the late 60s, Ivan Sutherland spoke of the concept in his creation of “The Ultimate Display”. The technology would allow users to move through three-dimensional spaces using head-mounted displays with position tracking.

For years this idea has been discussed with varying degrees of seriousness. However, as the popularity of virtual reality (VR) grows, more people are creating their worlds to explore.

Augmented Reality (AR) and VR technologies are essential parts of the Metaverse. These advances in digital imaging, display, and output devices are what make the Metaverse possible.

Social media giant ‘Facebook’ changed its name to “meta” in an attempt to rebrand itself as a “social platform for self-expression. The company is pivoting its ambitions for the “metaverse,” thus blurring the lines between the physical world and the digital one. However, Facebook (Meta) sn’t the only tech company to explore a 3D virtual reality where people interact with others using avatars of themselves.

ASEAN jumping on the bandwagon

The developments towards Metaverse are on the rise in Thailand, Vietnam, the Philippines and Singapore.

In Vietnam, the most expensive NFT game from Axie Infinity has topped cryptocurrencies related to the Metaverse. Created by Sky Mavis, the company’s market capitalisation has reached US$8 billion. Hence, more metaverse projects are developing in the country since the NFT craze earlier this year.

SHR Ring from Thailand recently announced the beginning of the application period for grants in practicable research in the areas of the Metaverse, digital identity, and NFTs. The company welcomes applications related to the use of digital identity in a Metaverse environment and the development and use of NFTs useful for events, venue access, identity verification, or any other application that does not include NFT arts.

Meanwhile, MetaDhana in the Philippines focuses on democratising Artificial Intelligence (AI), blockchain technology, and game development through the Metaverse ecosystem.

Although South Korea is a country without many natural resources, it has become one of the world’s top gaming countries by taking advantage of its highly skilled workforce and cultural content. Its gaming market is the fourth-largest globally and is expected to reach $18.6 billion this year. The gaming market accounts for more than 6% of South Korea’s total cultural exports, including film, music, TV shows, animation and video games.

The Metaverse, long regarded as a futuristic dream, quickly becomes a reality fueled by endless creativity. With companies such as Facebook, Zoom, Microsoft and Google investing heavily in the development of the technology, the dream is no longer just a buzzword. These new developments will allow consumers to look for games and entertainment, while organisations are most likely to explore VR meetings to improve collaboration and change how teams interact.